The name CO-WEST-PRO is a counter-reference to CO-INTEL-PRO – a syllabic abbreviation for the United States’ 'Counter Intelligence Program' that ran between the 1950s and 1970s. The program’s objective was to infiltrate, discredit and disrupt social justice groups, including feminist, black power and anti-war movements.

CO-WEST-PRO is a syllabic abbreviation for 'Counter Western Propaganda'. The objective of CO-WEST-PRO Consultancy is to counter the propaganda theatre ultimately directed out of the Western military-industrial-intelligence-complex which infiltrates, discredits and disrupts Global South countries gaining regional influence in ways that challenge Western dominance. The complex’s influence has trickled down into important civic institutions and mainstream industries. Of particular concern is its harmful influence on segments inside parliaments, media, advocacy organisations, think tanks and universities which have co-opted the international human rights law framework for propaganda purposes, with the end goal being strategic containment and foreign interference in Global South nations. For the more nefarious propagandists who have penetrated the human rights industry, the ultimate goal is smuggling in war propaganda under the cloak of human rights.

It is clear that human rights need to be protected from the people who are 'protecting' human rights. CO-WEST-PRO is here to fill the void.

CO-WEST-PRO stands by the values of the United Nations, especially the strengthening of universal peace through developing friendly relations amongst nations and suppressing threats to that peace. Make no mistake… one of the biggest threats to world peace is Western propagandists who groom us into war-lusting and armaments-hoarding. The only path to peace and disarmament is to see through the squid-ink cloud of Western propagandists and refuse to be their playthings. 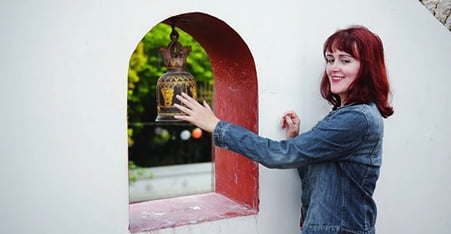 CO-WEST-PRO was founded by Jaq James. She became interested in the pernicious techniques used by Western propagandists after she moved from Australia to China and found nearly everything she was told about China by Australian journalists did not match what she saw on the ground. Over the following years, she started to uncover the multiple lies she was fed by Western propagandists. Her transition from an anti-China stance to a pro-engagement stance has been artistically recorded in her novella, called The Found One.

Jaq received a Bachelor of Laws with Honours from James Cook University in 2007 (where she was awarded the Marylyn Mayo Medal), a Master of Public Policy from the Australian National University in 2011, a Master of Education (TESOL) from the University of Southern Queensland in 2015, and is currently enrolled in a Master of Laws (specialising in international law) at the Australian National University. She was admitted as a lawyer of the Supreme Court of the Australian Capital Territory in 2012. Jaq has studied and worked in China, including work for the People’s Liberation Army as an English language instructor. Thus, Jaq has had access to a peephole on China that few Westerners have shared. The unique combination of her qualifications, experience, and talents in legal argumentation and simplification of complex concepts enables her to trail-blaze a new field of study.

To be clear, Jaq is unshakable in her loyalties and purpose: her loyalties lie with her country of citizenship and her purpose is to develop a much needed intersecting discipline between Western propaganda and international law. She has unequivocally rebuffed and will continue to rebuff all attempts at co-opting her as a political influence agent by proxies of foreign political parties. It is emphasised that Jaq’s interest in helping Global South countries only stems from her recognition that Australia’s ability to survive and thrive in the 21st Century is dependent on peace, security and prosperity in the Asia-Pacific region.